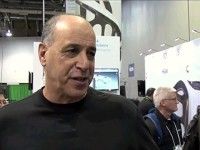 As usual, Autodesk University in Las Vegas last week was packed to the last seat. The message to the almost 10,000 participants was also clear: Autodesk is making an all-in bet on the cloud. But its not about the cloud for clouds sake, its about changing the way people work.

VerkstadsForums Editor-in-Chief, Verdi Ogewell, got an exclusive interview with Autodesks colorful chief executive, Carl Bass. Its really about making people more productive, he says, and in that way we see two things that are great about the cloud. One is the infinitely scalable computing capabilities which always provides the right amount of processing power. And the second thing - its a natural hub for collaboration

Carl went on to add, Theres almost no project that doesnt involve multiple people or firms. What we deliver is the tools needed for coordination and collaboration. He also pointed out that design teams now take product quality for granted. That frees them to focus on other issues, such as how to be more agile? How to get products to market faster and why arent my products more compelling?

Agility and innovation is what manufacturing customers are putting a premium on, according to the Autodesk chief. But powerful tools (like Autodesks cloud based PLM 360, Fusion 360 or BIM 360) isnt enough to compete successfully in todays tough commercial environments, says Autodesks Senior VP/CTO, Jeff Kowalski, We must change our mindsets and think outside. Even thinking outside the box is passé...

Besides the cloud, the real software star of the AU show was the new CAM 360  a cloud based solution that in many ways fills a gap in the Autodesk portfolio.  Its a revolution, says Autodesks VP of Strategy and Marketing, Brenda Discher. CAM in manufacturing is a very traditional process. Most CAM tools are expensive and have interfaces that are difficult to use. Discher says CAM 360 is the first CAM solution in the cloud, fully integrated with Autodesks Fusion 360.

It all sounds great  but does it work? Can you deal with the entire lifecycle of a product in Autodesks cloud? Are there no weak spots? To find out, Verdi interviewed ENGINEERING.coms Scott Wertel and analyst Marc Halpern of Gartner, along with customers like:

Watch this TV report. Itll give you a new perspective on using the cloud for product development and on Autodesks software development plans.

Currently the company has approximately 1.9 million commercial subscribers with maintenance contracts. Verdi reports that the majority of Autodesks revenues comes from on-premise deployments, but he expects that this transition to the Cloud and subscription purchase model will gradually take over as the top revenue generator. By 2018, some analysts estimate that Autodesk will get 70% of their revenues from cloud-based services, rental services and maintenance (today the figure is 40 %).