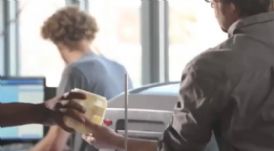 Many industry followers have concluded that the hype around 3D printing is peaking right now. The media coverage is massive, and President Obama even mentioned it in his State of The Union speech.
According to Analyst Gartner Groups Hype Cycle, which looks the hype surrounding various technology trends, consumer 3D printing is at the very top of "the peak of inflated expectations", slightly above things like Big Data and Gamification. However, industrial uses of 3D printing have had time to mature quite a bit, reaching what Gartner calls "the slope of enlightenment".

For example, aircraft manufacturer Airbus now 3D-prints metal parts
for its 300-series of aircrafts, including the latest model A350XWB.
According to Airbuss Peter Sander theres a lot to be gained. Not only
are the printed parts up to 50 per cent lighter, theyre also
stronger.

In this TV Report, Verdi Ogewell and his team look beyond the hype
and interview the people and the companies driving the technology
forward.  In this report, youll hear from: