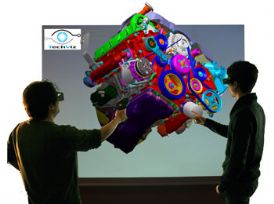 The PLM market is growing. After the 2009 recession, PLM investments from 2010 onwards showed a higher growth rate than most general IT spending. But there is a dark cloud - the growth rate fell by more than half in 2013.

Here are some numbers from analyst CIMdata:

Clearly the growth curve is flattening out.  But why? Is it a
result of gloomy economics?  Or are there industry-specific
explanations arising from new technologies, business and license
models? The short answer is that its a little bit of everything.

Many of the worlds economies are still in recovery mode
The PLM market is not immune to fluctuations in the global economy.
When the industrial activity in US, China or Germany slows down, it
certainly affects IT and PLM investments. Generally speaking, many of
the worlds regions are still in recovery mode, including, "locomotive
zones" like North America and Western Europe.  This leads to economic
caution and fragile spending. That wont change until the economic
recovery is well entrenched. To make matters worse, IT investments
generally are made late in the business cycle.
Of the three major global economic regions, the Americas, EMEA
(Europe, Middle East, Africa), and Asia-Pacific (AP), the first two
showed growth in terms of PLM investments last year, while AP was
slightly down. For 2013, the Americas and EMEA had around 35% each of
the PLM market investments, while Asia-Pacific had 30%.

Time to"digest" and develop effective use of existing PLM systems

Despite the weak economic conditions, PLM spending is still growing.
This trend will continue according to CIMdata. For 2014 they forecast a
5.5% growth and looking toward 2018, the analysts see an annual growth
rate of 5.8% to $46.3 billion.

Gartners Marc Halpern pointed out that, "The large companies have
already made significant investments in PLM and they have less
incentive to spend at the same levels as the past until they get the
business value they expected from the investments they already made."
Marcs message is essentially that companies have bought what they
basically need, at least in terms of software. Its now time to
"digest" and develop effective use of those purchases. Normally a
"digestive period" like this should have brought new opportunities to
the service providers, particularly in the cPDM (collaborative Product
Data Management) field. This time it didnt. "That cycle seems to be
broken or to have less impact", CIMdata concludes in its August report.

There may be different spending patterns arising from different
segments of the PLM market. Gartners Halpern asserts that they have
seen a higher level of inquiries from their clients about PLM vendor
selection and implementation practices. "PLM software still needs
improvements in usability to further advance its use outside of
traditional technical user communities into areas such as sourcing,
manufacturing, marketing, etc", he explains. This statement is in line
with what Accentures Senior General Manager, Eric Schaffer, claimed in
an earlier ENGINEERING.com interview,
"Large companies want to make the best use of the software like deeper
integration to ERP and MES systems, as well as advanced solutions for
program/project management, supply chain management, and more."

On top of this, software developers like Dassault Systèmes, Siemens,
Autodesk and PTC have invested heavily in making their solutions
easier to install and use, and more customers are using the
out-of-the-box capabilities that are provided. This suggests that the
types of services needed may shift away from installation to IT
integration and connecting the value chain all the way through the life
cycle, which is a focus of the large global companies.

Changing processes can come slowly in large organizations. PLM is a
good example. The first ideas around PLM surfaced in 19992000 (both
Dassault and SAP claim to be the "inventors").  That was followed a
couple years later by the first "partly" working connected software.
It was still a number of additional years before the systems reached a
state of smoothly running large scale operations.

All together were talking about a 10 year period to establish PLM.
PLM is not yet fully mature, especially in the areas of product
development and manufacturing integration.

When you add the complexity of product development "sub-trends" like
systems engineering, configuration management, master data management,
service life cycle management and Internet of Things, it isnt hard to
see why C-level executives are cautious about launching comprehensive
technological ventures. They recognize that each of these sub-trends
has great potential when it comes to accelerating future value in
product development.  Yet the software required to support these
sub-trends is still only first or second generation and/or in many
cases is not yet integrated into the PLM suites. Eventually more robust
PLM solutions will be offered, but for now the cautious step-by-step
strategy seems to be the most prudent.

In the meantime, PLM vendors may find more low hanging fruit. According
to Halpern, "While design software has penetrated the SMB market with
some success, PLM has not yet. With the right business model, the SMB
market has much more potential for growth."

2013 market characteristics
As stated above, the overall global investments in PLM related tools
and cPDM solutions grew by almost 5% in 2012 to just under $35B.  Of
that, around 65%, or $22.5B was invested in tools like CAD (product
definition), CAE (simulation and analysis), EDA (electronic design
automation), AEC (architecture, engineering, and construction), and ALM
(application life cycle management). Around 35% ($12.4 billion) was
invested in cPDM and Digital Manufacturing solutions.

Heres how CIMdata ranked the "PLM Mindshare Leaders" in terms of revenues:

Generally the big PLM players have performed well, but no doubt they
have all felt the impact of the global economy, "The past five years
have been characterized by weak global economic conditions, tight
credit markets, reduced liquidity, and extreme volatility in many
financial markets. Although revenue increased year over year in each of
2010, 2011, 2012 and 2013, the economic environment remains uncertain.
If the economic environment does not improve or deteriorates, our
business may be unfavorably impacted", PTCs CEO Jim Heppelmann explained in the companys annual fiscal 2013 report.

Autodesks CEO, Carl Bass, reasoned in similar terms
(fiscal 2013), "As our business has expanded globally, we have
increasingly become subject to risks arising from adverse changes in
global economic and political conditions. The past several years have
been characterized by weak global economic conditions While some
recent indicators point to a slow economic recovery, on the whole
indicators continue to suggest a mixed trend in economic activity among
the different geographical regions and markets."

Even Dassaults CEO and President, Bernard Charles,
in the 2013 annual report confirmed the trend captured by CIMdata, "In
an uncertain business environment, and after two years of record
results, we delivered a total revenue growth of 5%  compared with
2012".

The tricky problem of establishing solid licensing models
One problem in assessing PLM investments during 2013 and beyond has to
do with the changing licensing models, a matter which to some extent is
connected to merging technology platforms, like the Cloud.  "Yes, its
tricky", says Marc Halpern.

Increasingly, vendors are moving from paid-up licensing models to
subscription models. The paid up licensing models have annual
maintenance fees in the range of 18-22% of the license purchase price.
The subscription models demand payment each year that is in the range
of 30-40% of todays list software pricing. "While most of the software
in the market today is paid-up", Marc continues, " I see subscription
offerings growing and the vendors are motivated to grow the
subscription model rapidly because there is less pressure to sell new
licenses. If subscriptions grow as fast as the vendors would like, the
increase in revenue would not necessarily reflect real growth in the
number of users. Each user would be paying more, with software vendors
possibly selling fewer new licenses."

Furthermore the Gartner analyst asserts that, "The vendors are
trying to convince customers that the subscription model will reduce
internal IT costs since subscriptions mean that software version
upgrades happen automatically. So, end users theoretically pay more to
the vendors but overall costs drop. I am undecided whether or not I
believe this. It is an area of research for me. But, if the subscription
model works, we will see higher spends on PLM in 2014 and 2015".

The Cloud hasnt turned out to be a goldmine, so far...

Has the hype around PLM in the Cloud resulted in customer
investments? So far, the answer is no. In fact, it may be the other way
around, "the Cloud has affected the pricing and results on the
on-premise market negatively", claims CIMdata. While many PLM vendors
have offerings, most are yet to see any real returns on their
investments.

Meanwhile, the discussion of SaaS (Software-as-a-Service) has
created expectations of, if not lower, at least more effective pricing
models. This picture may change quickly if the new business models for
delivery and support of PLM act as triggers for greater investments.
"If SaaS for PLM succeeds, then more SMBs will invest", says Gartners
Halpern, adding that concerns about hacking, cyber terrorism, and (for
companies outside the US) concerns about US government sanctioned
monitoring of internet traffic passing through US owned servers, might
delay these ventures.  "But if software vendors overcome these
inhibitors and the business models succeed, users will be spending more
on PLM software which will lift revenues even if the number of users
remains the same."

Marc points out a couple of other potential growth drivers over the next 18 months:

1. Potential breakthroughs in PLM for software-enabled products (better
mechatronics support) and products that fit within the scope of
emerging Internet-of-Things (IoT). This also relates to greater spend
during the service life of products (e.g. PTCs business bet).

2. Greater spend in emerging markets (e.g. BRIC countries, maybe parts
of Africa). This, however, could be inhibited by current political and
economic tensions.

Most of the large global OEMs have started their journeys into the new
business opportunities created by trends like the Cloud, mobility,
product-as-a-service, IoT, 3D printing etc. Product innovation is
regarded by many as the best way to grow.  PLM strategies and software
can be key investments to support the "innovation-fueled" growth.

However, the hype surrounding these global trends may lead readers
to conclude that there will be imminent investment to implement new
software, methods, processes, and new business models. That would be an
incorrect conclusion. Global product innovation and development
processes are highly complex. The development of new processes has
begun, but will take years to achieve smooth practices, and just as
long to complete the full investments in related PLM software. The
uncertainties in global and regional economies are another limiting
factor.

That said, we can all see in which direction the market is
heading.  Eventually the investments related to PLM, ERP, MES, ALM, SLM
and M2M software will occur.
My take is that we will see an exponential investment growth; things are going to move faster than PLM has in the past.

Also, even in the early phases we are going to experience closer
cooperation between developers, service providers and users to evolve
these new solutions. After all, nobody wants to go through another "PLM
like" installation/implementation loop.