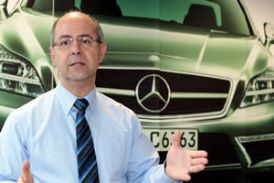 Large automotive OEMs dont switch CAD software. Its just too expensive to change. Thats why it was such a big deal when Daimler AG - Mercedes chose to make this dramatic move in late 2010. The company announced that it would replace Dassault Systèmes CATIA with its toughest competitor, Siemens PLMs NX.
This was a heavy blow for Dassault Systèmes, but nothing could prevent phase-out. Obviously Daimler had reached a level where the benefits of implementing a new system outweighed the complexity of improving an existing one. And so the migration process was initiated in the summer of 2011. The goal is to be finished with the bulk of the migration in 2015 for cars and vans and in 2016 for trucks and buses, said Daimler Mercedes PLM project manager, Dr. Peyman Merat.

So whats the current status of this huge project? New information has emerged from sources at Mercedes stating that the migration is going according to plan, and that the project "PLM 2015" has entered a critical phase. The plan is to be done on the automotive side by April next year. In total, more than 6,000 employees are affected by the change, and to date over 2,000 have undergone the necessary training. The remaining 4,000 are to complete the training program in 2014.
Lets take a closer look at the reasons for the Daimler CAD switch.

Bernard Charles - an air of confidence

Many things can be said about Bernard Charles, the CEO and
President of French Dassault Systèmes; he has an air of confidence and
perhaps more, at least according to some of his competitors. But its
also true that few in the industry have done so much to proselytize for
PLM as this charismatic visionary. The same thing goes for his latest
passion; the Companys 3D Experience concept.  According to Bernard,
this is the next evolutionary step in IT for product realization. "It
is", he says, "the step beyond PLM  a next generation system".

CAD the main revenue driver at Dassault
Given the "beyond PLM vision", it is perhaps a little surprising that
Dassault today is primarily a CAD company, at least in terms of
revenues. According to figures from PLM analyst CIMdata, direct sales
of CAD software represented approximately $ 1.6 billion (60%) of the
companys total revenue of $ 2.6 billion in 2012. This was made up of
CATIA (about 1.1 billlion) and SolidWorks (about 0.5).

This reliance on CAD may point to one of DS major challenges: to
get their solutions to operate smoothly in heterogeneous IT
environments, which almost always is the situation at larger
corporations.

DS has long excelled in pure Dassault environments.  The companys
solutions have excellent, even seamless connections throughout the
product development chain. 3D Experience is a particularly good example
of this, as are DSs recently created 14 industry-specific solutions.
But after much criticism and several steps back from a monolithic
approach  third party integration still can be a problem.  That was
one of the major drivers for the Daimler decision.

Plus 6,000 licenses at stake
In the case of Daimler, the cost for Dassault turned out to be an
installed base of over 6,000 CAD licenses of CATIA. However, the worst
damage was not the loss of a prestige customer or big licensing
revenue; the biggest loss for Dassault was worse than that.  The German
automotive industry is one of the worlds most important market
clusters for PLM software. Were not talking only about the large OEMs:
the supply chain related to the automotive giants are of equal, if not
greater importance. They consume even more PLM software than the
OEMs. And if Daimler wants NX instead of CATIA, well, supply chain
manufacturers may be driven to change as well.

A change driven by compatibility
So why did Daimler switch systems? Naturally, there were several
reasons, but one of the most important ones was the coupling
requirements between CATIA V6 and ENOVIA. Add to that the fact that
Daimlers proprietary product database, SMARAGD (based on Siemens PLMs
cPDM solution, Teamcenter), was incompatible with CATIA V6.

Thus, the decision to switch was made. When I spoke to him during
PLM Europe in Linz, Dr. Peyman Merat was reluctant to go into detail
about the reasoning, but he confirmed that "our change is driven by
compatibility issues between CAD and PDM software".

He also said that the migration of product data began in July 2011,
and that 2012 was about developing methodology and getting real about
using NX in projects.

Can Daimler work with NX and Catia data together?
Dr. Merat said that yes, to enable this Daimler created a
multi-CAD data model in their product database SMARAGD (12.1) with an
interface that solves the format problems.
Dr. Merat also said that they created an "NX package for subcontractors"
and that the distribution of these started as early as 2011.

Organizationally, the roll-out of NX is being conducted through a
sophisticated project plan.  The German car manufacturer has appointed
special "rollout managers" who ensure that the migration process is
executed. The training programs are role-based and tailored to the
different departments needs.

Long-term commitment
Theres no doubt that Daimlers NX commitment is long-term. They have
signed a ten year agreement with Siemens PLM. Dassault Systemes also
acquired orders for new software (CATIA, ENOVIA and the digital
manufacturing solution Delmia) from Daimler during the transitional
period, but a qualified guess is that this stream will slowly dry up.

The fact that Siemens PLM has both NX and their PLM Teamcenter suite
in place at Daimler makes their already strong position in the German
automotive industry even stronger. With PLM (Teamcenter) customers like
Daimler and the giant VAG Group (Volkswagen AG) they are as dominant
on the cPDM side as DS CATIA is on CAD.

Both Volkswagen and BMW are up for renewed CATIA contracts in the
coming couple of years, and Siemens PLMs chief executive, Chuck
Grindstaff, seems confident:

He said that the increasing complexity of vehicle design and development
has forced many automotive companies to evaluate their existing
systems to ensure that they use the premier technology solution.
Daimler is no exception...