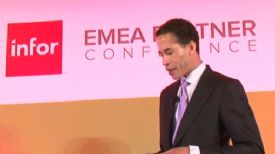 Infor is now #3 in ERP revenues behind big names SAP and Oracle. Since hiring former Oracle executive Charles Phillips the company has made ??a formidable journey from "the graveyard of ERP to become the worlds largest start-up", according to analyst Gartner.

In less than a year from the day he stepped up to his new position,
Phillips and his team tied together the sprawling Infor portfolio
(containing software such as LN, EAM, SyteLine, M3 and PowerFlex). "The
Secret" is the integration platform called Intelligent Open Network,
or "ION".

With ION, as well as other innovations like the integrated social
platform solution, Ming.le, the new "beautiful" interface SoHO,  and
Infors Cloud Suite the company even plans to "rattle" ERP business
leaders, SAP and Oracle.

But how did all this happen? What made the successful Oracle team
with Charles Phillips, Infor President Stephan Scholl and Duncan Angove
jump on what at the time appeared to be a "sinking ship"?

ENGINEERING.coms Verdi Ogewell met CEO Charles Phillips, who some
have described as "the Steve Jobs of business software", in Barcelona
during an Infor partner event. Clearly Phillips has set his sights
high.  He is aiming for Infor to become the first ERP vendor in the
cloud offering  complete solutions for micro verticals. These solutions
are customized for different sub-segments of the main
industrysegments.  "GM and Ferrari are a good examples", says Infors
VP of product strategy, Soma Somasundaran. "They have very different
needs although both of them are in the automotive industry".

Different segments and different needs, yes, but the common
denominator is the Cloud.  In Infors case it referes more specifically
to the Amazon Cloud. But first, customers must migrate their data to
the Cloud.  Phillips and his team have set a low barrier to switching,
"Weve offered to do it for a fixed fee, $ 55,000", said Phillips, "and
let me tell you that this Upgrade X offer attracted.  In a couple of
weeks we had over hundred customers literally raised their hands".

In this TV-report you will also meet: