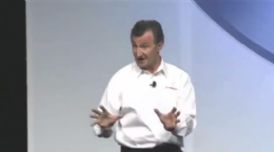 SolidWorks World in San Diego in late January showcased a number of big changes in what is becoming a very dynamic industry. The Dassault-owned company that has long been about purely CAD, simulation and PDM is now a dedicated PLM supporter and a cloud supporter. But while tough PLM competitor Autodesk has made an all-in bet on the cloud, SolidWorks is bit more cautious. As youll see in this video report, SolidWorks is offering a bridge to the cloud with their new concept design tool, Mechanical Conceptual.

The video features first hand interviews with the Solidworks
Chairman and Dassault Systèmes CEO Bernard Charles as well as with
SolidWorks CEO Bertrand Sicot and Director of Product Management,
Kishore Boyalakuntla.
The report also gives you a first look at the application itself,
demonstrating the collaborative features of the Mechanical Conceptual
concept modeling tool.

The age of experience

"We are positioning SolidWorks to face the age of experience," says
Dassaults CEO and President, Bernard Charles to ENGINEERING.coms PLM
TV News team. He continued, "But this is only the beginning.  We are
investing massively in new software", and as we move ahead youre going
to see more apps and even SolidWorks CAD software in the cloud.

The Dassault chief also underscored that SolidWorks today is far
from just CAx and PDM. "SolidWorks is a family of different solutions
covering much more than that, and all these cool apps are now taking
advantage of DS 3D Experience platform.

He added that the debate about which modeling kernel should be used
 Dassaults V6 or Parasolid that is owned by Siemens and currently
runs in SolidWorks - has become almost irrelevant. "The 3D Experience
platform is open and compatible to most formats, and this makes the
issue of the geometry engine end up in a whole new light".

The 3D Experience architecture gives DS SolidWorks users access to
the social dimension, the 3D aspect of things, and vast simulation
capabilities as well as Big Data and intelligence tools, Bernard claims
in this TV-interview.

SolidWorks just took the first step in the, "Bernard
masterplan" by releasing Mechanical Conceptual. As previously reported,
Mechanical Conceptual was originally presented at SolidWorks World 2013
and was planned to be in "release mode" by October 2013. During the San
Diego event DS SolidWorks CEO, Bertrand Sicot said that the new
release date will be April 2, 2014.

"But it is worth waiting for," he continued. "Its a game changer and
the things our customers in the Lighthouse program have done with
Mechanical Conceptual is amazing." Companies like American
manufacturer, Karl W. Schmidt and German machine tool firm J. G.
Weisser Söhne have used this solution (the cases are covered in the
TV-Report).  Sicot claims, "They have saved 20 to 50 percent of
development time in their respective early design and sale cycles."

Its easy to understand the enthusiasm of these early adopters,
according to Greg Mark, CEO of 3D printer developer MarkForg3D.
MarkForg3D designed and presented the worlds first carbon fiber 3D
printer.  It can produce parts 20 times stiffer and 5 times stronger
than the traditional ABS plastic.  About Mechanical Conceptual he
said, "When I saw their demo on main stage it was one of these
"where-have-you-been-all-my-life" moments"!

But is it too expensive?

So is the new SW Mechanical Conceptual a game changer? What can
you do with it? Isnt SolidWorks a bit late compared with what their
competitors have already done? And what about the pricing of this new
product at $249 dollar/month? The pricing has already created controversy in the SW community.

Watch this TV-Report, produced by ENGINEERING.coms and VERKSTADFORUM.ses PLM TV News team to find out the answers.